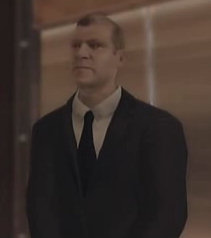 The bodyguard is a character in the storyline of the video game Lost: Via Domus. In "Hotel Persephone", the bodyguard prevents Elliott from entering the same elevator as Zoran Savo and Beady Eyes in the Hotel Persephone. Elliott gets past the guard by pointing out that Lisa is a journalist, which causes him to leave his post to investigate. He speaks with a strong Australian accent. ("Hotel Persephone") ("Whatever It Takes")

Retrieved from "https://lostpedia.fandom.com/wiki/Bodyguard_(Via_Domus)?oldid=879282"
Community content is available under CC BY-NC-ND unless otherwise noted.