Bob "BJ" Jones is believed to be a survivor from Oceanic Flight 815.

The message reads as follows: 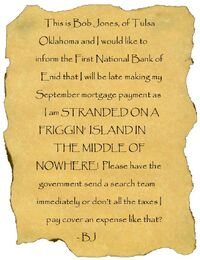 Because the Oceanic website is run by ABC and not the writers, it is uncertain whether a character named BJ is among the survivors on the show.

It remains unknown how Robert, Sally, Jake and BJ were able to hack the Oceanic website and post their messages. Their messages cannot be four from the message bottle in "Exodus: Part 1", because the bottle that contained the messages was washed up onto the beach and came to be in the possession of Sun.

Retrieved from "https://lostpedia.fandom.com/wiki/Bob_%22BJ%22_Jones?oldid=662940"
Community content is available under CC BY-NC-ND unless otherwise noted.