Bloopers are production errors by cast or crew that are heard or visible onscreen. Continuity errors are bloopers that don't match storyline or timeline from other parts of the same episode or other episodes. Confirmed bloopers and errors so far are listed below, by episode.

Given the enormous detail and complexity of the mysteries of Lost (and the fact that fans are actually encouraged to do such microanalysis through the placement of real Easter eggs), the show is perhaps the most closely-scrutinized in history, and therefore subject to greater criticism for minor errors not caught in the editing room. Many production errors have in the past been mistaken for clues the writers intended to leave. Some still remain persistent rumors which spawn misdirected theories about time travel and odd conspiracies.

Officially confirmed errors are noted in blue; debunked errors, which were thought to be accidents but turned out to be deliberate anomalies or otherwise explainable, are noted in red. 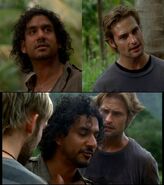 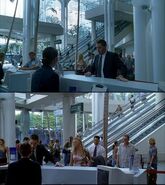 In "White Rabbit", Jin and the other background extras are waiting at the counter next to Jack; in "House of the Rising Sun", they're all standing in line behind him

When Boone and Locke originally find the Hatch in "All the Best Cowboys Have Daddy Issues", the surrounding area doesn't match with the location used for later episodes

Grid fence can be seen briefly in the background 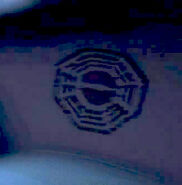 The infamous shark with the DHARMA logo 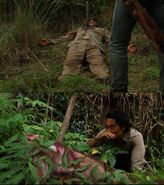 The vegetation in the area where Goodwin's dead body rests differs between "...And Found" and "The Other 48 Days" 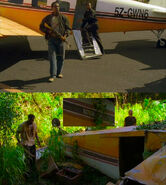 Two different Beechcrafts used in "The 23rd Psalm", as evident from the different callsigns

Subtitling error in "The Whole Truth" 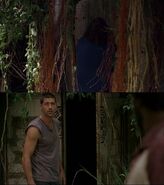 The Swan's "front door" is arguably two continuity errors, not just one: firstly, that they would spend so much time on opening the Hatch, when a clear, visible, accessible entrance was nearby; secondly, that it is originally shown as a wooden door, but as a metal door in later episodes 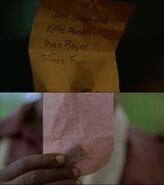 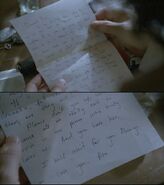 The letter that Penelope wrote Desmond changes between scenes of "Live Together, Die Alone, Part 1" (different line breaks and wording)

Chinaman's Hat seen in the distance

A close encounter with the Others in "Live Together, Die Alone, Part 1" 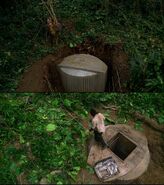 Someone has started burying the Hatch again. Also, the door has grown in size

In "A Tale of Two Cities", Petula Clark's "Downtown" found its way into a Talking Heads Speaking in Tongues jewel case (acknowledged by the producers as a last-minute change of music in the 10/09/06 podcast

There is a new vehicle just within camera range, in the lower right corner

A crew member reflection in the cabinet mirror, in an unaired promotional still featuring the adult Jin and Sun

Advertisment for the Royal Scots, featuring a soldier in a US Army uniform and the American spelling of "honor"

Speedometer of Claire's mom's car as seen in "Par Avion", set to show the speed in miles per hour, rather than kilometers per hour, as would be the norm in Australia

DHARMA Initiative schematics for the Looking Glass station call it a "hatch", a name that the Oceanic Flight 815 survivors came up with for the Swan

Prop error found on the wall

How does a bullet pass through a water bottle but make only one hole? ("Meet Kevin Johnson")

Ben appears to be on a hard surface...

...then a softer surface. ("The Shape of Things to Come")

Juliet misspells "forceps" and "Gauze pads" on her list of medical supplies. ("Something Nice Back Home")
Add a photo to this gallery

The ceiling of the studio used for the cave

The shadow of the Lighthouse is too short in this shot

In "House of the Rising Sun", Adam & Eve's skeletons were separated, not side-by-side, as shown in "Lighthouse" and "Across the Sea"

Jack looking at the camera, thus breaking the fourth wall
Add a photo to this gallery

As the Series' title "LOST" moves toward the camera and into focus, the edge of the center of the letter "S" flickers black momentarily. This is due to incomplete skinning of the three-dimensional frame of the word. To date, the error has not been fixed and has appeared in every episode.

Several small box and container props have been identified by fans as being re-used in the filming of episodes in disparate locations. These reuses are likely unintentional, and thus may be interpreted as a type of minor continuity error.

The rectangular box in Michael's flashback.

The rectangular box in Sun's flashback.

The rectangular box in Charlie's flashback.

The hexagonal box in the Swan.

The hexagonal box in "The Greater Good", identical to the box in the Swan.
Add a photo to this gallery

Since the introduction of the Swan and DHARMA Initiative, the Swan logo has been used several times interchangeably with the main DHARMA logo. This has resulted in countless errors where jumpsuits, food products and other DHARMA items have been branded with the Swan logo despite the fact that they are in no way related to the Swan.

Sawyer's wine from the Barracks is mislabeled with a Swan logo.

Roger Linus was a Workman delivering beer to the Pearl, but is shown wearing a Swan patch.

Evan in the video game, the entrance to the Flame also has a Swan logo on it.
Add a photo to this gallery

Retrieved from "https://lostpedia.fandom.com/wiki/Bloopers_and_continuity_errors?oldid=1116190"
Community content is available under CC BY-NC-ND unless otherwise noted.