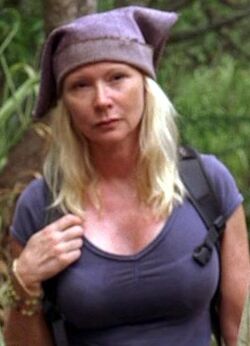 Blonde casualty was a middle section survivor of Oceanic Flight 815. The Blonde casualty is an uncredited background extra character, who was shot and killed on Day 97, by the mercenary team. She often wears a purple bandanna.

On the day of the flight, the Blonde casualty was at the airport bar which Jack and Ana Lucia were at. ("Exodus, Part 1")

The Blonde casualty was first seen when Danielle Rousseau came the the survivors beach camp to warn the survivors that "The Others are coming". ("Exodus, Part 1")

A week later the Blonde casualty welcomed back Jin, Libby, and Bernard when they returned from their trek across the Island. The next day she attended Shannon's funeral. When Charlie started a fire near the survivors' camp, she along with others, tried to put it out. The next day, she listened to Sawyer's speech about how he conned the whole group. ("Collision") ("The Long Con")

A few days later the Blonde casualty watched in amusement as Jack beat Sawyer in a game of poker. She also listened to Bernard's speech about making a SOS sign however, she opted not to participate in the construction of the sign. On Day 66 she attended the funeral of Ana Lucia and Libby and witnessed Desmond returning on his sailboat. ("Lockdown")  ("S.O.S.")  ("Live Together, Die Alone, Part 1")

Blonde casualty could be seen packing for the trek to the radio tower, and was present when Karl landed on shore in the outrigger to camp to warn the survivors about the Others' planned raid on the beach camp. Soon after she trekked to the radio tower and watched as Ben intercepted the survivors on their way to the tower. She was overjoyed to hear that rescue was coming when Jack made contact with the freighter. ("Greatest Hits") ("Through the Looking Glass, Part 1")

Blonde casualty celebrated with her fellow survivors as they awaited rescue. The survivors made their way to the cockpit, where they were intercepted by Locke. He attempted to convince the survivors to join him in his journey to the barracks. Blonde casualty chose to join Locke's survivor faction and go to the Barracks, one of four extras to do so. The next day as she walked with Locke's group to the Barracks, she was one of the first to discover Charlotte Lewis in a small river. ("The Beginning of the End") ("Confirmed Dead")

When the mercenary team invaded the Barracks, Blonde casualty ran out of her house after Doug was shot while collecting firewood. Sawyer warned her to return inside, but before she could respond, she was also shot in the chest and killed. Incidentally, this killing gave her character "redshirt" status. Her death prompted Jerome to come out of the house as well, whereupon he was also shot and killed. The fate of the fourth extra shown to join Locke's faction was not depicted in the episode. ("The Shape of Things to Come")