"The Man from Tallahassee"

Ben's painting was first seen in Ben's house. The portrait depicted a blond woman wearing a white dress seated outside in a wicker chair. A pot with flowers was nearby, specifically anthuriums (as seen at the Orchid station), and the woman was holding a small mammal like a hamster. There was no mention of the painting in the episode; it was only seen in the background as Locke and Ben passed by it. ("The Man from Tallahassee")

The same painting was seen in the Linus' home during an on-Island flashback. The young Ben passed by it as he returned home at night, just before discovering his father passed out on the couch. ("The Man Behind the Curtain")

During the attack on the Barracks, Hurley and Locke were standing next to the painting. It seemed to be hanging on its original position on the wall again. The painting itself however was still consistent with the second appearance. ("The Shape of Things to Come")

The painting above Locke ("The Other Woman")

Hurley with the painting ("The Shape of Things to Come") 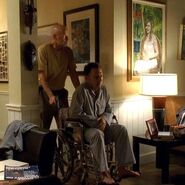 Locke and Ben pass by the painting ("The Man from Tallahassee")