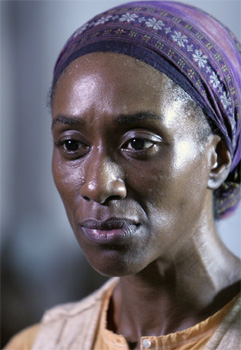 Beatrice Klugh, more commonly known as Bea, was a member of the Others who seemed to have a position of leadership within the group on a similar level to Tom Friendly. On her first appearance, she introduced herself as Ms. Klugh, and Bea was revealed to be the shortened version of her first name by Tom at a later date. Ben and Juliet referred to her by her full name. Beatrice was shot dead at the Flame by Mikhail to prevent the survivors obtaining information from her about the location of the Barracks.

When Michael was brought to the Others' camp by Tom, he met Ms. Klugh, who asked Michael several questions about his son, including his biological connection to him, Walt's age when he first started speaking, any illnesses Walt might have had, and her most notable question, "Did Walt ever appear in a place he wasn't supposed to be?", possibly referring to Walt being seen by some of the survivors after the raft was blown up in the water. Another possibility is a reference to the phenomenon of bilocation. When Ms. Klugh asked Michael this question, he hesitated out of surprise, and possibly an unwillingness to acknowledge that Walt had in fact appeared to him at some point. The notion of bilocation also fits Shannon and Sayid's experience of seeing Walt in the jungle when he was, at the same time, on the Others' boat. ("Abandoned")

After a week, Michael was being held captive in one of the Others' huts. As Ms. Klugh entered in order to give Michael his dinner, he demanded again to see his son. Ms. Klugh finally agreed to let them see each other, for three minutes only. ("Three Minutes")

She called Pickett to bring the boy in and watched the emotional reunion between father and son. When Walt began to reveal the Others are "pretending", meaning they're not who they say they are, and that they make him take tests, Ms. Klugh announced, "We are not going to talk about that," and had Walt taken out of the hut, but not before she threatened to send him back to "the room" if he did not behave. As Walt was taken away, Michael reluctantly agreed to Klugh's demands: release an Other who was captured by Michael's people, and then bring four of his friends, whose names were on a list, to the Others' camp — Jack Shephard, Kate Austen, James Ford, and Hugo Reyes. ("Three Minutes")

When Walt was locked up in Room 23, he did something that frightened all of the Others present. Like Juliet and Tom, Beatrice refused to go into the room. ("Room 23")

After three days, Michael led the four other survivors to the Others' camp, only to discover that Jack knew he had betrayed them and did not reveal anything to the other castaways because he already had a plan. Once they reached the capsule dump, they were attacked by the Others, who drugged them and took them to the Pala Ferry dock. Once there, Kate told Tom they knew the beard he was wearing is fake. Tom did not understand her, as she was gagged, so Ms. Klugh repeated Kate's revelation, saying, "She says she knows your beard's fake, Tom." An irritated Tom removed his beard, and said sarcastically, "Thanks for telling them my name, Bea." ("Live Together, Die Alone, Part 1")

Kate and Sayid entered the basement of the Flame searching for other "hostiles" who may have been present there along with Mikhail Bakunin. Upon entering the basement, Sayid and Kate spread out and while Kate was searching through a rack of DHARMA Initiative uniforms, Beatrice leaped out and pounced on her. After a short scuffle, in which Beatrice had the upperhand, Sayid arrived, stopped the fight and held her at gunpoint.

After Kate recovered from the ambush, she recognized Beatrice from Pala Ferry as one of the Others who had been involved in her kidnapping and with this realization proceeded to punch her twice in the face.

After this, Sayid and Kate ascended to the upper level of the Flame with Beatrice as a hostage. They came upon Mikhail, who was holding Locke as a hostage, and during the confrontation, Beatrice and Mikhail began shouting to each other in Russian.

For fan theories about these unanswered questions, see: Beatrice Klugh/Theories

Retrieved from "https://lostpedia.fandom.com/wiki/Beatrice_Klugh?oldid=1117729"
Community content is available under CC BY-NC-ND unless otherwise noted.