This article is about a DHARMA member Arlen. For all uses of the same last name, see disambiguation page: Arlen 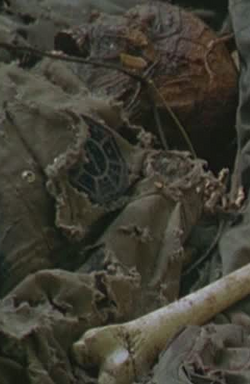 Arlen was a member of the of the DHARMA Initiative security team. He was killed in The Purge.

Arlen was killed during The Purge, and his body was thrown into the Mass Grave by The Others.

After Locke was shot by Ben, he fell into the Mass Grave. ("The Man Behind the Curtain")

Sometime later, Locke noticed there's a gun on Arlen's body, so he crawled to the body and got the gun. When Locke tried to commit suicide with Arlen's gun, Walt appeared and told him he had work to do. ("Through the Looking Glass, Part 1")

Later that day, Locke carried Arlen's gun to the Radio Tower, and threatened to shoot Jack if he contacted the freighter. ("Through the Looking Glass, Part 2")

It's unknown what happened to Arlen's gun, after Locke left the Radio Tower.

Retrieved from "https://lostpedia.fandom.com/wiki/Arlen_(DHARMA_Initiative)?oldid=1105894"
Community content is available under CC BY-NC-ND unless otherwise noted.