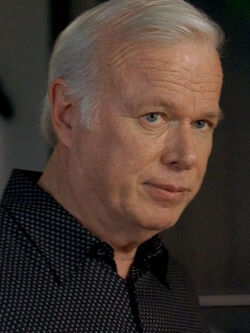 Anthony Cooper was the presumed name of John Locke's biological father. Cooper was shown to have used the alias of Adam Seward and he claimed to have used Tom Sawyer, Ted MacLaren, Louis Jackson and Paul, among others. He was, by his own admission, a con man. As "Tom Sawyer", he seduced James Ford's mother, Mary Ford and then used her in order to swindle money from her and her husband, which resulted in the death of both. This prompted James to take on the alias "Sawyer", and to hunt down his namesake. Cooper was killed by Sawyer on the Island. ("The Brig")

Emily Annabeth Locke became pregnant while she was fifteen. Her mother referred to the man she was dating at the time as being twice her age. If true, Anthony could have been born as early as 1924 and as old as 80 when he died. ("Cabin Fever")

Later in Cooper's life, he conned a woman named Mary Ford under the alias of Tom Sawyer for $38,000. This con resulted in her husband killing her and himself over the incident, and sent their son, James Ford, on a quest to murder the man he perceived as killing his parents. He wrote a letter when this first happened, and vowed to make the man responsible read it out loud to him before James killed him. ("The Brig")

When John Locke first found him, Anthony was on dialysis and in need of a new kidney. He got close to John by taking him hunting occasionally. Locke volunteered to give his father one of his kidneys. However, after the surgery, Locke woke to find Cooper had already checked himself out of the hospital. Locke's mother admitted that she had worked with Cooper to con Locke into donating his kidney. ("Deus Ex Machina")

Cooper moved in an attempt to get away from Locke, who was stalking him, but John managed to find his new home. Locke waited outside his house nearly every day in his car. Eventually Anthony opened the car door and got in, telling Locke that he knew he'd been stalking him and wanted it to stop, finally telling him, "Don't come back; you're not wanted." Helen eventually convinced John to move on, and he and Anthony were out of contact for a while. ("Orientation")

Some time later, he faked his own death to avoid retribution for a $700,000 dollar retirement con he pulled on Jimmy Bane. He followed Locke around town in a white car until Locke found out it was him. He asked John to retrieve the money from a safety deposit box and left him $200,000 as promised for his help. Later Locke brought the money to a local motel, where Cooper was waiting for him. Cooper offers Locke his part of the money, but Locke refuses. Cooper is leaving but suddenly Helen stands in the door way. She asks "Are you him?", and slaps him. After he has left, Locke proposes to Helen, who tearfully rejects Locke. ("Lockdown")

Several years later, John stumbled into another of Anthony's cons. Going by the name "Adam Seward," he was attempting to marry Mrs. Talbot in order to steal her money. Peter Talbot, her son, suspected his plan and attempted to intervene and went to ask John. Locke confronted his father at a flower shop, demanding that he call off the wedding. He told Cooper that Peter was aware of the con and threatened to tell Mrs. Talbot the truth. Cooper agreed to call off the wedding. However Peter Talbot died suddenly and mysteriously. John went to Anthony's apartment to confront him over the death, but Anthony said he had nothing to do with it. Locke went to the phone to call Mrs. Talbot. When John turned his back, Anthony suddenly rushed and pushed him out an eighth story window, leaving John's back broken and leaving him permanently paralyzed. His actions make it very likely that he did kill Peter Talbot. Soon after, Cooper was suspected to have fled to Mexico and he disappeared. ("The Man from Tallahassee")

According to his own later account, Cooper heard with the rest of the world that Flight 815 had gone down in a trench near Bali, and he believed that John had died along with all of the other passengers. Some time later, he says, he was driving down I-10 through Tallahassee when someone slammed into the back of his car, sending him through the divider at 70 miles per hour. He remembers being put in an ambulance, where one of the paramedics smiled at him, receiving some kind of injection, and then waking up gagged and tied to a chair on The Island. ("The Brig")

When Locke arrived at the Barracks, Ben told him about a "magic box" on the Island that could grant wishes and later asked Locke if he wished to see what Ben had found inside. He then opened the door to a small basement room in which Anthony was sitting bound and gagged. Previously, Ben had referred to Cooper as "the man from Tallahassee". ("The Man from Tallahassee") Locke asked Ben how he got to the Island, and Ben told him to ask Cooper. When Locke removed his gag cloth, Cooper bit him on the hand, then yelled out "Don't you know where we are, John?" ("The Brig")

Cooper was brought with the Others when they left the Barracks, and was later seen tied to a stone column at the edge of their camp site. Ben informed Locke that he could not become a full member of their group until he made a definitive break with his past--by murdering Cooper. When Locke balked at killing him, Cooper started to mock his son, claiming he still "wants his daddy." Shortly after this, the Others broke camp and left Locke and Cooper behind, with Ben telling Locke that he shouldn't follow them unless he's carrying his father's corpse on his back.

Acting on knowledge obtained from a file given to him by Richard Alpert, Locke carried Cooper to the Black Rock. He then lured Sawyer there to kill him, claiming the man he was holding captive was Ben. After Locke locked Sawyer and Cooper in the brig together, Cooper told Sawyer about how he came to the Island. He corroborated Naomi's claim that Flight 815 was found with no survivors, and shared his belief that the Island was actually Hell. Cooper then inadvertently revealed his past connection to Sawyer, who handed him the letter he wrote to the original Sawyer as a child, demanding that he read it. When Cooper mocked Sawyer and tore up his letter, Sawyer strangled him to death with a chain. ("The Brig")

Locke carried Cooper's body all the way back to the Others' camp. He didn't tell them that Sawyer had been the one to kill Cooper. ("The Brig") ("The Man Behind the Curtain")

In the flash sideways, Anthony enjoyed a much healthier relationship with his son John Locke. He was still responsible, however, for the conning of James Ford's parents.

He was described by his son as a "great father", and after John received his flying license he took Cooper along as his first passenger. This first flight resulted in a horrendous crash that paralyzed John and put his father into a vegetative state. ("The Candidate")

Years later, a photograph of Cooper and his son Locke was tacked to the wall of Locke's cubicle at the box company on the day that Randy Nations fired him. ("The Substitute")

Chasing a lead that "Sawyer" was in Australia, Ford did not find Cooper, but finally learned his real name. Upon returning to Los Angeles, Ford began sorting through various Anthony Coopers who may have been present in Alabama in 1976. ("Recon")

Tired of making wedding plans, Locke's fiancée Helen Norwood suggested they bring Anthony and her parents and get married "shotgun-style" in Las Vegas. ("The Substitute")

After fixing Locke's back, Dr. Jack Shephard attempted to find out more about the accident that caused Locke's paralysis. Thanks to information from John's dentist, Jack went to the Sun Palms Nursing Home. He met Helen there, who introduced him to the vegetative Cooper, who was unable to move or speak. ("The Candidate")

Retrieved from "https://lostpedia.fandom.com/wiki/Anthony_Cooper?oldid=1115044"
Community content is available under CC BY-NC-ND unless otherwise noted.