This page is about the character from "The Man Behind the Curtain". For other uses of "Anne" see: Anne (disambiguation). 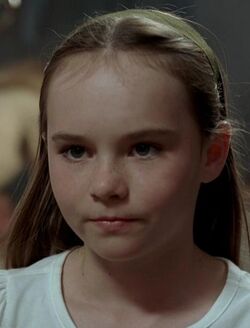 Annie was Ben's childhood friend on the Island.

Soon after Ben's arrival on the Island, he was greeted by Annie at the processing center. Annie introduced herself and gave Ben an Apollo Bar, telling him that they could have "as many as they want." Their meeting was cut short, however, as a disappointed Roger stormed out with Ben.

Annie was also in Ben's class, which was taught by Olivia. One day, after an experiment with a miniature volcano, the barracks were attacked by the Hostiles. Olivia told Annie to lock the door, after which Annie guided Ben to safety by bringing him to the perimeter of the classroom. Annie attempted to comfort Ben by telling him that it was "just the Hostiles."

Unlike Roger, Annie remembered Ben's birthday, and presented him with a pair of carved wooden dolls, designed to represent herself and Ben. She gave the girl to Ben and kept the boy, telling Ben that because they each had the other's doll, they would never have to be apart from each other. The doll was a significant gift for Ben, and he kept it with him throughout his adult life. When Richard sees Ben with the doll and asks what it is, he says simply that it was a birthday present.("The Man Behind the Curtain")

Four years later, she was evacuated with all the other children except Ben. ("Follow the Leader")

On the DVD commentary track for "The Man Behind the Curtain", Damon Lindelof and Carlton Cuse describe Annie and Alex as the two most significant women in Ben's life. Annie is described as a character that is going to play a "huge part" in upcoming storylines: "Annie is going to prove to be very significant in Ben's life," and that even the island's volcano will be "slightly less important than Annie, but still seismic." However, on the March 11, 2010 podcast, they said Annie is not central to the show in a literal sense, but she instead was a major part of Ben's life and maturation process (e.g. Juliet being a proxy for her). In the same podcast, they also suggested that Annie and her family may have left the Island two years later in 1977.

Before season 4, Michael Emerson believed that Annie would return to the show as an adult.[1] Later, perhaps jokingly, he called the show's failure to return to Annie's story his "only regret from Lost.[2]

Retrieved from "https://lostpedia.fandom.com/wiki/Annie?oldid=1082987"
Community content is available under CC BY-NC-ND unless otherwise noted.