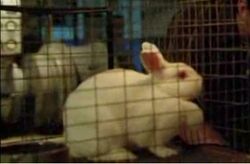 Angstrom is a research rabbit possibly used by Widmore's team in tests they ran using the Hydra Island generator. Like the ones the DHARMA Initiative tested, it is an albino rabbit. It appears to live or at least spend significant amounts of time in a cage.

Retrieved from "https://lostpedia.fandom.com/wiki/Angstrom?oldid=1048588"
Community content is available under CC BY-NC-ND unless otherwise noted.