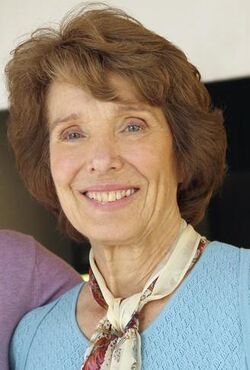 Amelia was a member of the Others who was seen as part of the book club. ("A Tale of Two Cities")  ("The Envelope") She apparently lived at the Barracks before the Others left.

On the day of the crash, Amelia arrived early to Juliet's for the book club meeting. Seeing Ethan working outside on her way in, she jokingly chastised him for taking so long to fix Juliet's plumbing. Inside, Amelia noticed that Juliet was upset about something, and pressed her to know what it was about. Juliet then requested that Amelia not tell anyone what she was about to show her. As Juliet was about to reveal Ben's X-rays, they were interrupted by the doorbell; presumably other book club members had arrived. ("The Envelope") ("A Tale of Two Cities")

During the book club meeting, Amelia seemed amused with Juliet's argument against Adam, regarding her book choice. She was also present to witness the crash of Flight 815. ("A Tale of Two Cities")  ("One of Us")

For fan theories about these unanswered questions, see: Amelia/Theories

Retrieved from "https://lostpedia.fandom.com/wiki/Amelia?oldid=1106137"
Community content is available under CC BY-NC-ND unless otherwise noted.