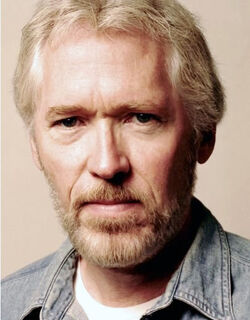 Alvar Hanso was the Danish CEO of the Hanso Group and the founder of the Hanso Foundation, and the great grandson of Magnus Hanso.

Although little is known about his early life, it is understood that he was involved in providing munitions to resistance groups in Europe during the Second World War, and following this was the leading purveyor of high-technology armaments for NATO. However, during the 1960s, Alvar would establish the Hanso Foundation, in contrast to weapons development, aiming to "reach out for a better tomorrow" and preserve life on Earth through science and technology.

When Gerald DeGroot was a graduate student, in search of financial backing for his project the DHARMA Initiative, he contacted Alvar for funding.

In 1967, he addressed the UN Security Council, where he made a speech about "man being blessed by his own curiosity". Eight years later, Alvar appeared in the 1975 DHARMA Orientation Film, introducing the DHARMA Initiative to recruits, and explaining its purpose to the world. The project began due to Alvar discovering the Valenzetti Equation, which had been commissioned by the United Nations in 1962. Its findings predicted the exact amount of time until mankind extinguished itself as a species. Hanso built research facilities on an island to research and attempt to modify the equation's results (thereby changing the date of the "end of the world").

He later bought every copy of Gary Troup's book The Valenzetti Equation, which described the theory's premise, including all rights to a reprint. In December 2002, Hanso made his last public appearance in Madrid, and then seemingly disappeared for years. He was traced by Rachel Blake in 2006 to Narvik, Norway. There, he admitted on camera that he was being held prisoner by his second-in-command at the Hanso Foundation, Thomas Werner Mittelwerk. He also revealed that he was in fact Rachel's father (presumably having had a relationship with her mother whilst she worked for his company), and had secretly financed her first-rate education for years before she began to question how her mother could afford it. (Norway Video) After Blake published the video and sent it to the authorities, Hanso was freed, releasing a statement on the Hanso Foundation website promising to reorganize the Foundation after Mittelwerk's corrupt actions.

According to Dr. Eliza Vasquez, there is something unusual about Alvar's bloodwork, which she suggested may have serious consequences to his health (see below). Javier Grillo-Marxuach also revealed in the aftermath of the Experience that Alvar was older than he seemed, after himself taking part in the Foundation's life extension experiments [1].

"Driven by a need for privacy and a deep-seated sense of humility, Alvar Hanso has released few details of his personal life to the public.

He first made his mark during the Second World War, providing munitions to various resistance movements around Europe. After the War, Hanso became the leading purveyor of high-technology armaments to NATO.

After decades of keeping the world safe through the development of sophisticated weapons systems, Hanso turned his attention to critical areas of science and technology - always searching for new ways to improve the human experience, and create a brighter future for all humanity.

Still running his vast network of companies, Hanso has set new standards for philanthropy and the support of pure scientific research for the betterment of the entire race."
- taken from http://thehansofoundation.org

On thehansofoundation.org website, a Persephone hack became available under Alvar's profile page. It detailed his disappearance from the public eye.

Persephone's final hack on the Hanso Foundation website showed a letter from Eliza Vasquez (see article for full letter). She wrote to Hanso advising him to contact her immediately after she'd taken a blood sample without his wishes. She stated that there was something unusual in the sample, and that if he didn't see her he may risk heart problems.

The hack then also showed hidden camera footage of Alvar's reserved car space, office desk and nearby elevator. Persephone noted that Alvar had not been there in months. The three screens changed to say “Where Is Alvar”

On his podcast, DJ Dan spoke to a caller who claimed they saw Alvar Hanso running a tour de stade. Dan replied by saying:

This supported evidence by Dr. Vincent "Wally" Bolé that Alvar was himself involved in life extension, and was the first source to give an indication of Alvar's approximate age (though much of Dan's information on the show was speculative).

In Sri Lanka, Rachel Blake filmed the Sri Lanka video, which included an Orientation film introduction by Alvar Hanso from the 1970s. See the video in full here.

With the help of her contacts, Rachel managed to infiltrate the house where Alvar was being kept a prisoner. There he told her what Mittelwerk had done, as well as reveal that he was indeed her father. To read a transcript, see here. <youtube>ntRCiwmiFQQ</youtube>

After Mittelwerk became a wanted fugitive, Alvar was released and reinstated as head of the Hanso Foundation. He released a press release (viewable here), where he thanked Rachel and her followers, and promised to make amends for the bad name Mittelwerk had given the company.

Mysteries of the Universe

Mysteries of the Universe, a fictional 1982 television series that aired on the ABC network, dedicated its fourth program to Alvar Hanso and his connection to the DeGroots and the DHARMA Initiative.

In Chapter 23 of the meta-fictional book Bad Twin, Thomas Mittelwerk takes Alvar Hanso's place on the Widmore Corporation board. The two companies are said to have dealings together, but no explanation is given why Alvar is suddenly absent. Head of the board, Arthur Widmore comments talks with his son Cliff about the change:

The following quotes have been attributed to Alvar Hanso.

For fan theories about these unanswered questions, see: Alvar Hanso/Theories

Retrieved from "https://lostpedia.fandom.com/wiki/Alvar_Hanso?oldid=1116015"
Community content is available under CC BY-NC-ND unless otherwise noted.