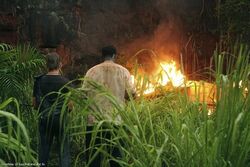 "All's Forgiven... Except Charlie" is an orchestral piece on the Season 2 soundtrack. It plays at the end of "The 23rd Psalm".

Eko gives Charlie a Virgin Mary statue, replacing the one he broke. He puts on Yemi's cross, and tells Charlie he is a priest. As the Beechcraft containing Yemi's remains burns, Eko recites the 23rd Psalm. Charlie joins in.

Back at the camp, Sun and Jin introduce themselves and offer Ana Lucia food. Libby sets up her shelter with Hurley's help. Sawyer admires how Kate cut his hair, and Jack gives him more medicine. Charlie approaches Claire, who is moving her tent far from Charlie's. She sends him away.

In talking to Ana Lucia, Sun and Jin appear to forgive her for killing Shannon. Claire, however, does not forgive Charlie for lying to her and possibly returning to heroin.

Retrieved from "https://lostpedia.fandom.com/wiki/All%27s_Forgiven..._Except_Charlie?oldid=1109693"
Community content is available under CC BY-NC-ND unless otherwise noted.