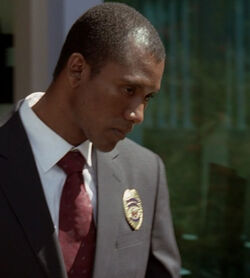 This airport guard was an employee at the Herarat Aviation airport in 2001 and was stationed at the main gate. When Juliet Burke arrived to meet with representatives of Mittelos Bioscience, this guard directed her to Ethan Rom and Richard Alpert. The pair drugged the young doctor and took her aboard the Galaga submarine. ("One of Us")

While it is not made clear whether or not this guard is an associate of the Island's natives, the Lost Encyclopedia suggests he was simply an unwitting guard at the airport.

Retrieved from "https://lostpedia.fandom.com/wiki/Airport_guard?oldid=1095605"
Community content is available under CC BY-NC-ND unless otherwise noted.