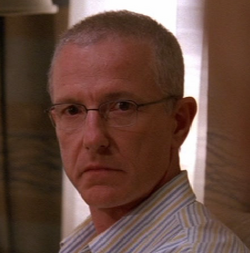 Adam was a member of the Others. In his short appearance he made it clear that he is very loyal to Ben.

Adam was first seen at the book club arguing with Juliet over the Stephen King novel Carrie. He commented that the book is "not even literature," that there is "no metaphor," and it is "by-the-numbers religious hocum-pocum." He said that Ben would not even read it in the bathroom, to which Juliet commented about a lack of free will, presumably on the Island. Just then, a loud noise prompted all of them to take cover and then go outside, where Adam and the Others looked up to see Oceanic Flight 815 break apart in the sky. ("A Tale of Two Cities")

Adam appeared in the book club scene again, which was shown briefly in "One of Us".

For fan theories about these unanswered questions, see: Adam (Other)/Theories

Retrieved from "https://lostpedia.fandom.com/wiki/Adam_(Other)?oldid=1106138"
Community content is available under CC BY-NC-ND unless otherwise noted.