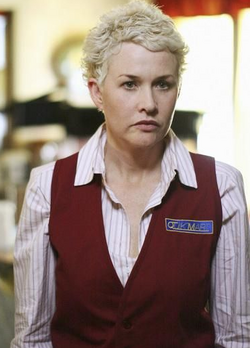 Abigail Spencer was a woman living in Oxford, England where she worked at the Quikmart convience store. Living in a row house with her younger sister Theresa, Spencer was forced to tend to her sister following a terrible accident that involved an experiment by Theresa's boyfriend in college, Daniel Faraday.

While the experiment left Spencer's sister as an invalid and Faraday disappeared soon after, her financial problems were relieved by the intervention of Charles Widmore. Financing Theresa's medical bills and affording the family a live-in nurse, Widmore became a symbol of hope and compassion for Spencer. When Desmond Hume knocked on her door following a lead given to him in the search for Faraday's mother, Spencer warned Hume not to trust Faraday, claiming him to be a coward after what he did to her sister. ("Jughead")

In the casting call she was described as "Female, 30s, British; working class. Stoic - but deeply wounded. Has a way with bitter sarcasm, though she's a loyal caregiver at heart."

Wikipedia has information related to:
Abigail Spencer
Retrieved from "https://lostpedia.fandom.com/wiki/Abigail_Spencer?oldid=1095817"
Community content is available under CC BY-NC-ND unless otherwise noted.