Start a Wiki
A Wrinkle in Time 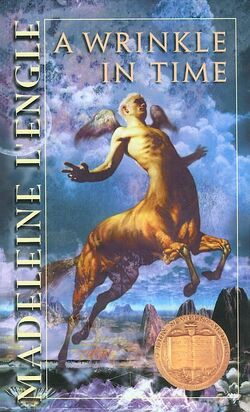 A Wrinkle in Time is a children's fantasy novel, written by Madeleine L'Engle, and first published in 1962. The book has also been the recipient of numerous book awards. The story is about two children, accompanied by a friend, who search through space and time for their father. It involves an evil (known as The Black Thing) that is expanding through the universe, tesseracts and multiple dimensions, culminating in a happy ending (kinda).

The character of Charles Wallace is a psychic child.

Similar to Are You There God? It's Me, Margaret and The Outsiders, the book is listed on the American Library Association's most frequently challenged books, due to the references to liberal Christianity and religion.

Wikipedia has information related to:
A Wrinkle in Time
Retrieved from "https://lostpedia.fandom.com/wiki/A_Wrinkle_in_Time?oldid=1020874"
Community content is available under CC BY-NC-ND unless otherwise noted.