Start a Wiki
"A New Day" 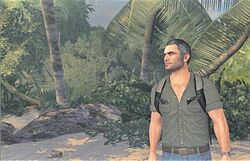 "A New Day" is the second episode of Lost: Via Domus. Jack, Kate, and Charlie return from their trip to the cockpit. Elliott goes looking for his camera in the cockpit wreckage.

Elliott is with Lisa in Thailand around August 15, 2004. Take a picture of Lisa with her arm on her hip with the fisherman in the picture. This will trigger Elliott remembering that he was taking photos in Thailand for the travel section of a newspaper. You then look at three objects. The first is a newspaper that details the theft of "nerve agent" from a Hanso foundation facility in Sabaragamuwa province, Sri Lanka on August 8, 2004. The second is Lisa's diary which has entries for August 15th and August 16th 2004 giving details of the vacation and her investigation of Savo. The final one is a tape of Lisa saying that she intends to keep her investigation of Savo secret from Elliott. Lisa (who speaks Thai) tricks the fisherman so they can steal his boat. She tells him a story about a woman in trouble and he runs to help.

Jack, Kate and Charlie arrive at the beach running from the Monster after their visit to the cockpit. Kate suggests that your camera might be there but that Jack is not allowing anyone to leave the beach. After talking to Jack, Lisa appears on the beach. Elliott approaches Lisa, but she disappears.

Scattered along the beach Elliott finds a comic book on the far end, a chessboard by the fuselage, and a Drive Shaft CD along the jungle line near the fuselage, among a pile of luggage and debris.

Michael tells him that the cockpit can be reached through a cave. Michael gives him a lighter to help him see.

Elliott trades Michael for a torch to help him navigate through the caves. He follows the wall to the first light spot in the cave. The caves are filled with deep pits, bats, and the Monster. Elliott discovers a dead polar bear inside the cave. At the end of the cave is an opening that leads to the jungle.

Elliott finds the cockpit, and he enters the front section. There is a broken panel with a large supply of fuses next to the working panel.

After Elliott activates the panel, the container holding the camera opens and he takes the camera.

Elliott leaves the cockpit. It is dusk, and the sun has already set. After Elliott turns around the corner, he encounters Ben and Juliet. Ben tells Elliott that "we think you might be the one". Elliott asks "who are you people?" to which Ben replies "we're the good guys". Tom comes from behind Elliott, and knocks him out with a club. Juliet then injects Elliott with something and he passes out.

Retrieved from "https://lostpedia.fandom.com/wiki/A_New_Day?oldid=1096016"
Community content is available under CC BY-NC-ND unless otherwise noted.