This article is about the episode. For other uses, see 316 (disambiguation). For episode 3x16, see "One of Us". 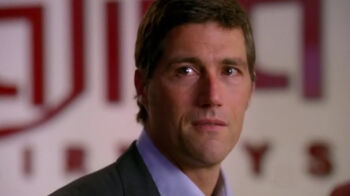 "316" is the 6th episode in Season 5 of Lost and the 92nd produced hour of the series as a whole. It was originally broadcast on February 18, 2009. The way back to the Island is revealed to members of the Oceanic Six, but there is trouble ahead when not all of them wish to return.

Jack's eye opens as he awakens in a bamboo grove, dressed in a suit; mimicking the first scene from the pilot episode. He looks around in amazement, then notices he's holding a torn piece of paper on which the words "I wish" are legible, a fragment from Locke's suicide letter to Jack. ♪ Jack hears Hurley crying for help, drops the note and runs through the jungle, along a stream, to the top of a waterfall, where he sees Hurley flailing in the lagoon below, struggling to hold on to a guitar case. Jack dives into the water and helps Hurley out of the deep part of the water. They notice Kate lying unconscious on the side of the pool, and hurry over where Jack awakens her and informs her that they’ve successfully returned to the Island. ♪

None of the three remember actually crashing and none have seen Ben, Sun, Sayid, any other survivors, or any wreckage of the plane. Jack suggests that they split up and search for survivors, but before they can do anything they hear music. ♪ The source of the music is a DHARMA van in what appears to be in new or very well maintained condition, which emerges from the jungle and pulls up next to the lagoon. A man in a DHARMA Initiative jumpsuit gets out and points a carbine at the three survivors. Hurley then recognizes him and the man lowers his weapon; it is an astonished Jin.

In Los Angeles, Eloise Hawking takes Jack, Sun, Ben, and Desmond into the basement of the church. There she opens a blast door, revealing a room containing a map, a pendulum-like mechanism resembling a Foucault pendulum, and various computers. ♪ She announces that this is a DHARMA Initiative station called the Lamp Post and it was through this station that they found the Island. Jack asks Ben if he knew this existed. Ben denies knowledge, but when Jack asks Eloise whether Ben is telling the truth, she says "probably not." ♪

Eloise explains that the Lamp Post was created years ago over a pocket of electromagnetic energy, which is connected to similar pockets around the world. The people who built it knew the Island existed but not where it was. The Island is "always moving", which is why the survivors of Flight 815 were never rescued, Eloise claims. She explains that one of the men built the pendulum in order to predict where the Island would appear in the future. Using those calculations she has determined the position of a "window" to the Island which will close in thirty-six hours. As she is explaining this, Jack examines calculations on a chalkboard and a large photograph of the Island marked "9/23/54 - U.S. Army - OP 264- Top Secret - Eyes Only."

After hearing Eloise's talk, Desmond realizes that Jack intends to return to the Island. Desmond delivers Daniel Faraday's message to Eloise, warning her that Daniel and everyone on the Island needs her help. Eloise tells Desmond the Island isn't done with him, but he angrily recounts how following her past instructions cost him 4 years of his life. Desmond tells Jack that they are being used and that he is "done with the Island" as he storms out of the room. Eloise hands Jack a binder containing lists of airline flights and their coordinates. Eloise then informs Jack that Ajira Airways Flight 316 to Guam will pass over the Island's location and that all of his friends must be on that flight.

Eloise asks to see Jack alone and takes him to another room of the church which appears to be her office. She gives Jack an envelope containing Locke's suicide note. She explains that Jack must recreate the crash of 815 as closely as possible. Locke will act as a proxy for Christian Shephard, and Jack needs to give Locke something belonging to his father. Jack is skeptical, but Eloise tells him "That's why it's called a leap of faith." ♪♪

In the main hall of the church, Jack approaches Ben, who is kneeling in a forward pew with his hands together up to his nose as though praying, with his eyes open. Jack asks where Sun is; Ben says she left. Jack asks about Locke and his coffin, which Ben tells him he will pick up on his way to the airport. As Ben walks to the votive candles and lights one, both men ask each other about Eloise, but neither provides answers. Ben looks at the painting positioned above the candles: The Incredulity of Saint Thomas by Caravaggio. Ben tells Jack about Thomas the Apostle, noting Thomas’ claim to fame was not his bravery, but his doubt regarding the Resurrection of Christ. Jack asks if Thomas was ever convinced. Ben explains that Thomas needed to touch Christ's wounds to be convinced and then says, "We're all convinced sooner or later, Jack." Ben walks toward the doors, and Jack asks where he's going to which Ben replies, "Oh, I made a promise to an old friend of mine--just a loose end that needs tying up." Jack looks again at the Caravaggio. ♪

Later, while sitting in a bar with a seemingly untouched drink in front of him, Jack receives a phone call from an assisted living facility. There, an official tells Jack that the resident in question attempted to run away and that if it happens again they will have to transfer him to another facility. In a common room, Jack greets an elderly man named Ray. Ray, revealed to be Jack's grandfather, had attempted to run away from his retirement home, going so far as to pack a suitcase. As Jack helps his grandfather unpack he notices a pair of black dress shoes. Ray explains that the shoes were among Christian’s belongings which Margo had sent to Ray following Christian's death. Jack asks to take the shoes, and Ray readily gives them to him.

Jack returns home and pours himself a drink (but does not drink it), then hears a suspicious noise. Going into his bedroom he finds Kate in the darkness, lying on his bed in tears. ♪ She asks if he is still planning on returning to the Island and then offers to return with him. When Jack asks why she changed her mind and where Aaron is, she refuses to answer and makes him promise to never ask her that question again if he wants her to come with him. ♪ Jack agrees, and Kate then kisses Jack passionately.

The next morning, Jack prepares coffee and orange juice for Kate. She notices Christian's shoes, and Jack explains why he had put white tennis shoes on his father’s body back in Sydney. When the phone rings, Kate leaves, telling Jack that she will meet him at the airport.

After she leaves, Jack answers the phone. It is from a drenched and bloodied Ben, who is calling from a pay phone at Long Beach Marina. He claims that he has been "sidetracked" and that Jack should retrieve Locke's body from Simon’s Butcher Shop. Jack travels to the butcher shop where he is let in by Jill. ♪ In the freezer, Jack opens Locke's coffin and replaces Locke's shoes with his father's. He then places Locke's unopened suicide note in Locke's jacket, claiming that he's "heard everything you have to say" and closes the casket. ♪♪♪

At the airport, Jack makes arrangements with the gate attendant for transporting Locke’s body. While doing so, he sees Kate arrive, apparently trying to look discreet in sunglasses and with her head down. ♪ As he heads towards the gate a man offers his condolences. He then runs into Sun, who says that if there is the slightest chance of Jin being alive she needs to return to the Island. As they head to gate 15 they see Sayid, apparently handcuffed, and being accompanied by a woman, apparently a federal marshall. At the gate, Hurley, appearing nervous or reluctant and carrying a guitar case, informs the Ajira employee that he has purchased all the remaining 78 available seats on the flight, but not why. It is implied that it is to save innocent people from any forthcoming crash. Jack goes up to Hurley, greets him and asks how did he know. Hurley nervously responds by saying "it doesn't matter. I'm here."

As the flight is about to close their doors, Ben comes running up at the last minute with his boarding pass. His face is battered and his arm is in a sling. Hurley becomes agitated at Ben’s presence, but Jack assures him that Ben is necessary. As Ben takes his seat, one of the flight attendants tells Jack that security had found something of his in the cargo hold and again hands him Locke's suicide note. ♪

Once the plane reaches 30,000 feet, the captain turns off the "fasten seat belts" sign. ♪♪ Jack moves up a few rows and sits with Kate. He remarks how crazy all this is and how it's weird that they are all together again. Kate says "We're on the same plane, Jack. That doesn't make us 'together'." The captain makes an announcement: "Welcome to Ajira Air, this is is your Captain, Frank J. Lapidus." Jack and Kate look at each other, stunned. After a moment, Jack asks the flight attendant to tell Frank about his presence. A clean-shaven Frank comes out and happily greets Jack, saying he "picked up this gig about 8 months ago." However, he then sees Hurley, Sayid, Sun, Ben and Kate. Realization dawns and he asks "We're not going to Guam, are we?" ♪

It then turns to nighttime on the plane, and Ben is reading Ulysses. Jack asks him how he can read (i.e., in view of the tension), and Ben sarcastically answers "my mother taught me." (Just a phrase, since Ben has never met his mother.) He then answers honestly that he can read because it's better than what Jack is doing, "waiting for something to happen." Jack then mentions Locke's suicide note, which he feels is following him. Ben suggests he read it, and says he'll give Jack privacy to read the letter in peace. Jack then opens and reads the note, which simply states: "Jack, I wish you had believed me. JL." Ben is seen walking swiftly to the front of the plane and immediately thereafter the plane encounters turbulence. ♪ As everyone buckles up, the turbulence increases and eventually the plane is engulfed in a flash of white light identical to the flashes that accompany the abrupt changes in space/time on the Island. ♪♪

The Season 5 soundtrack includes the following tracks from this episode:

For fan theories about these unanswered questions, see: 316/Theories

Retrieved from "https://lostpedia.fandom.com/wiki/316?oldid=1117162"
Community content is available under CC BY-NC-ND unless otherwise noted.