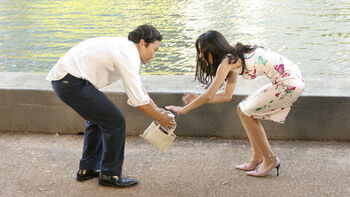 "...And Found" is the fifth episode of Season 2 of Lost and the thirtieth produced hour of the series as a whole. The tail-section survivors trek back to the southern beaches of the Island, but encounter trouble as Michael sets off by himself to find Walt. Meanwhile, at the main camp, Sun is heartbroken as she realizes that she has lost her wedding ring.

Sun is getting dressed in a fancy room when her mother enters and asks her if she's really intending to wear the shoes she's wearing. When Sun doesn't understand why her shoes aren't acceptable, her mother explains that her date might be shorter than she is, and makes her put on a shoes with a lower heel. She goes on to criticize Sun for not finding a husband in college. Sun insists she was at college to learn. Mrs. Paik says Sun's father thinks it is time to find a man and get married before it's too late.

Meanwhile, as Jin prepares for an important job interview at a big hotel, his roommate, Tai Soo, consults an astrology book and suggests to Jin that he is destined to find love soon. Jin jokingly asks what true love will look like. Tai Soo says Jin's true love will be ... "orange." Jin tells Tai Soo about his ambitions to get a job, get promoted, and make a name for himself. When Tai Soo asks him what he should say if love calls, Jin tells his friend to tell love "to wait."

Jin takes his resume to the Seoul Gateway Hotel and tells his interviewer, Mr. Kim, about how he held a job at another hotel and was promoted from busboy to waiter. Mr. Kim catches him in the lie, saying Jin is a bumpkin villager who stinks of fish. He hires Jin as a doorman anyway, with a stern warning that Jin is not to open the door to anyone like himself. Sun is set up on a blind date by a matchmaker. It is with Jae Lee, the son of a family that owns twelve different hotels. Although Sun is hesitant, she and Jae hit it off, and the pair schedules a meeting at the hotel where Jin is working.

Jin opens the car door for Jae and allows Jae to borrow a flower from him for his date. Sun walks past Jin into the hotel with Jae. Inside, after a pleasant meal, Sun starts to warm up to Jae. He suggests, however, that they keep seeing each other to keep their respective parents from pressuring them, because he plans to marry a woman he met in America. Sun feels used, wishes him well, and immediately leaves.

At the same time, a poorly dressed father and a young boy approach the hotel and ask Jin for permission to enter; the boy urgently has to go to the bathroom. Jin tells the man there is a bathroom down the street and asks the boy if he can "hold it," but the boy just shakes his head. Jin tells them they can use the bathroom, but to be quick. The father thanks Jin and tells him he's a "good man." Mr. Kim observes this and gives him a stern dressing-down, again insulting his background. Jin quits on the spot and departs.

Later, wandering along a bridge, Jin passes a woman in an orange dress. Looking back wistfully, he shakes his head in amusement and turns around, colliding directly into Sun. Sun drops a few bags, which Jin helps pick up. They gaze at each other in silence. ♪

On the familiar side of the Island, Sun talks to Claire about how they think the raft is doing. Claire trusts that Michael knows what he is doing. Claire is puzzled when Sun starts to frantically look around, only to learn that her wedding ring is missing. ♪

Later, Jack sees Sun going through her things looking for the ring, and tries to help by telling a story about how he lost his wedding ring and tore apart the garbage and the plumbing looking for it. When Sun asks where he found it, he says he didn't, he bought a replacement instead and his wife never found out. Sun doesn't seem too sure how she feels about that answer. She pointedly notices Jack has no wedding ring on his left hand. Jack sees her looking and laughs it off uncomfortably, saying the ring is now "rattling around in its sock drawer back home." Jack offers to help Sun look for the ring, but she declines.

Later, Hurley gives advice, suggesting Vincent ate the ring while Sun was feeding him. Hurley tells Sun a funny story about the time his dog Buster accidentally swallowed a bunch of coins, and then later "crapped out a buck thirty-five in nickels." Hurley asks Sun if she's ever had a dog. Sun tells Hurley about Bpo Bpo, which she says is Korean for "a kiss."

Later, when Sun is angrily tearing apart her garden, Locke arrives. Locke acts calmly as Sun says she doesn't remember ever seeing him angry. Locke laughs and says he often used to be angry and frustrated. Sun asks him why he no longer becomes frustrated, and he says he is not lost anymore. Sun asks him how he found himself. Locke answers, "The same way everyone finds something that is lost: I stopped looking."

Finally, when Kate tries to console Sun, telling her everything is all right, Sun says that certainly isn't the case, and reveals that the message bottle had been recovered. Kate asks where it is, and Sun says she had buried it. Upon digging up the bottle, Kate becomes upset and frantically attempts to read all of the messages. Sun stops her and says the messages are private. Kate tells Sun she never said goodbye to Sawyer. Kate glances at the sand and tells Sun to look down. Sun's wedding ring is lying in the sand; Sun rejoices with happiness. ♪

Jin, Michael, and Sawyer are in one side of the bunker; everyone else is one the other side. Michael tries to encourage Jin by telling him that he'll be with Sun real soon. Ana Lucia tells them they are moving out to the camp where the middle section survivors live and they need to get ready for a long walk.

To prepare for their long hike, Ana Lucia and company decide it's best to gather food. Sawyer suggests escaping, but Michael shrugs the idea off because he wants to "figure out what the hell's going on over here before I make any decisions about anything." Ana Lucia orders Cindy to go with Sawyer, Libby, and Michael to travel together and gather fruit while she and Bernard get fish. Jin says he should fish with Ana and Bernard, and after Sawyer suggests she take him up on his offer, Ana Lucia lets Jin come.

While fishing, Ana Lucia thinks Jin is being lazy and not helping to catch the fish, but soon finds out Jin has used sea urchin as bait and caught a great number of fish with his net.

Michael sets off with Libby to collect fruit. They talk, but can't seem to find any food. Libby apologizes for throwing Michael and his friends into the pit; Michael jokes that he isn't friends with the "redneck," referring to Sawyer. He asks Libby why the Tailies threw them into the pit. She says they are scared and have "trust issues." Michael suggests that they go inland as that's where all the fruit is on his side of the Island, but Libby refuses. "That's where They come from," she says.

Meanwhile, while Jin, Ana Lucia, Cindy, and Bernard sort through the fish, Sawyer is resting. A knife is placed in a piece of wood next to his head, stirring him. The knife belongs to Mr. Eko, who tells Sawyer the knife is for his protection when they travel. He introduces himself to Sawyer, who nicknames him "Mr. Ed". Libby runs in, saying Michael ran away. Jin figures he has gone to find Walt alone. He immediately wants to look for Michael, but Ana Lucia thinks otherwise. Sawyer seems content letting Michael go, but Jin starts to run off only to be stopped by Eko, who says he will accompany Jin. They set off after Michael while the remaining survivors head for the camp.

On their journey to find Michael, Jin and Eko have stopped and Jin starts again but Eko says "No." Jin hears rustling and thinking it is Michael, he goes to investigate. A boar runs out and knocks him down a hill. Jin comes to a stop near a dead body with a stake sticking out of his chest. Eko comes over and says, "His name was Goodwin." "Others?" Jin asks, and Eko nods his head.

Eko notices Jin has a wedding ring and asks him if he has a wife; Jin says yes. Eko then asks Jin what her name is, to which Jin replies "Sun." Eko asks if Sun was on the plane, to which Jin nods.

Jin finds footprints which he believes to be Michael's. Eko senses someone coming, and he and Jin hide. Hidden in the bushes, they see a procession of people go by in an almost unearthly silence. The Others are seen only from the knees down, all barefoot, all muddy, and the last, a child, carrying a brown teddy bear on a cord.

After the close encounter with the Others, Jin offers to let Eko go back; Eko declines, saying they must stick together.

Sawyer is having trouble keeping up with the trek due to his gunshot injury, which causes Ana Lucia to threaten to leave him behind. Sawyer asks Ana how she'll find his camp without him. Ana says she'll follow the beach or let Eko guide them when he gets back. The two exchange some flirtatious/sarcastic banter. Sawyer asks Ana if she is married, she replies that she is not. She asks Sawyer if he's gay. Sawyer laughs and says "Funny," then continues on.

Jin finally finds Michael at a waterfall, yelling his son's name. Jin chases Michael down, despite Michael's wishes for Jin to "go away." Eko appears and tries to convince Michael to go back with them, but Michael isn't convinced. Jin tells Michael, "You find Walt," meaning that he will find Walt but should go with them now. Michael chooses to go with Jin and Eko, rather than continue his wild goose chase for Walt.

This episode introduces a new theme for Sun and Jin, which replaces their earlier theme, and a motif for the Others.

Retrieved from "https://lostpedia.fandom.com/wiki/...And_Found?oldid=1116941"
Community content is available under CC BY-NC-ND unless otherwise noted.