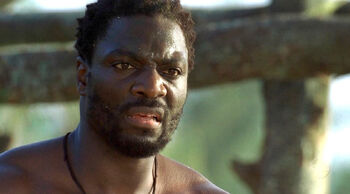 "?" (pronounced "Question Mark") is the 21st episode of Season 2 of Lost and the 46th produced hour of the series as a whole. After Eko experiences unusual dreams, he asks John to take him to the ? shown on the blast door map he saw. At the Hatch, the rest of the survivors must come to terms with what just transpired and try to ease the suffering of a mortally wounded Libby.

Mr. Eko, posing as a priest and going by the name "Father Tunde," takes confession from a man who seems to confess to adultery, but reveals he has a forged Australian passport for Mr. Eko to enter the United States. Another priest tells him the trip to the U.S. is delayed, as a miracle has happened: A woman has claimed that her child drowned in a river but was resurrected the next day. He informs Mr. Eko that he has been chosen to start an investigation of the claim. After meeting the mother, Mr. Eko tells the Monsignor he is not a good choice because he does not believe the claim. The Monsignor, however, explains that this is exactly why he was chosen.

Eko interviews the medical examiner about his account of the "miracle". The examiner informs a skeptical Mr. Eko that the girl was came back to life during the autopsy and provides an audiotape as supporting evidence. Eko visits the family who reported this miracle and finds a stare-eyed daughter at the porch. The mother comes out and informs him that it is not an appropriate time for him to visit. The father comes out, orders his wife and child to go back inside, and tells Eko that the whole incident was simply a misunderstanding. He claims that his wife knows that his psychic services are a fraud, that she is a fanatic and was making the claim to "spite" him.

Eko tells him that he will report that the incident was not a miracle. As he leaves, he sees the daughter staring at him from the window.

Mr. Eko picks up his tickets for the flight while he is at the Oceanic Airlines terminal. As he begins to walk away from the ticket desk, the girl who supposedly drowned confronts him. She informs Eko that his brother Yemi contacted her when she was "between places." She then says she knows that Eko's not really a priest, but he should have faith in himself anyway, as Yemi still does. Eko begins to angrily question the girl as to how she knows about Yemi but Libby overhears him and ask them if everything is all right. Eko shrugs it off and leaves.

Eko is chopping wood with his axe on the beach, continuing to build his church. Ana Lucia appears on the beach and asks him what he is building. Eko explains that the idea of a church came from a dream. Ana Lucia responds, "A dream like this one?" Eko then notices she has a bullet hole and is bleeding from her stomach and from her mouth. She tells Eko, "You need to help John." ♪ Eko's dream travels to the Swan, where he finds his dead brother Yemi sitting at the computer. Yemi tells Eko that Locke has lost his way, and that Eko needs Locke to take him to "the question mark." He also tells him to bring the axe. The room starts to violently shake. The timer has reached the red and black tiles, but now the hieroglyphs are replaced by question marks.

The letters on the computer keys have also been replaced with question marks. Eko wakes up hyperventilating and Charlie, sleeping nearby on the beach, turns over and asks, "What's the matter?"

Locke, Sawyer, Kate, and Jack are moving through the jungle when Michael stumbles out of the Hatch, claiming he had been shot in the arm by a person unknown to him. The group enters the Hatch and begins to investigate. Eko appears with his axe and offers his help. Sawyer and Kate discover that Ana Lucia slumped on the couch and Libby on the floor both with gunshot wounds. Kate tells Jack that Ana Lucia is dead. Libby coughs up a mouthful of blood, and Jack rushes to treat her as fear crosses Michael's face.

Eko prays over Ana Lucia as Locke looks on. ♪ Jack insists that they go after "Henry," whom Michael says he left only half an hour earlier. Sawyer insists that Jack remain and tend to Libby's condition.

Eko offers to track down Henry Gale with Locke as he can track and they set off. Locke cannot find a trail, but Eko lies that he has found it, so Locke follows him down a random path. Locke wonders what Eko is following as he realizes that there there really is no trail. Locke prepares to head back, but Eko asks Locke to take him to the question mark. When Locke refuses, Eko headbutts him and knocks him out.

When Locke later regains consciousness he shows Eko the diagram he drew from his memories of the blast door, with the question mark in the middle. Eko then tells Locke that they will go to the question mark, stating that Ana Lucia told them in his dream to find it. Locke responds with a look of skepticism. Eko asks him, "Have you ever followed a dream?" Later, as the two are arguing about symbols on the map that Locke had copied from memory, Eko steps on a Virgin Mary statue, and the two stumble into the burned plane. Eko asks what made the plane fall and Locke answers that it was "Boone who made it fall" and that his death was "a sacrifice that the Island demanded." They make camp and "wait for further instructions."

In the Hatch, Michael asks if Libby had said anything. Jack says that she is still unconscious and is suffering and that all he can really do is to make her more comfortable. Jack then gives Sawyer a stern look. Sawyer responds by insisting that he already gave him all of the medications. Jack clarifies that he was referring to the heroin. He asks Sawyer to fetch it and that Kate should accompany him so that she knows where Sawyer has hidden the guns. Sawyer agrees and leads Kate back to his tent. Kate learns to her surprise that he hid his belongings in a pit underneath his bed. When they leave the tent Hurley approaches them and asks if they have seen Libby. Kate tells Hurley the bad news. ♪

In a dream, Yemi appears before Eko and directs him to climb the cliff. At the top, Yemi, seated in a wheelchair, says "Wake up, John", and in terror, Eko loses his grip of the cliff and falls back to the bottom. Locke wakes from the nightmare. When he describes his dream, Eko tells him that the priest he saw was his brother, Yemi. Locke says that Yemi wanted him to follow. He then looks up the cliff from his dream, and Eko climbs the cliff. Eko struggles to the top and Locke calls to him asking if he has found anything. Eko surveys the islands verdant landscape and replies that he hasn't found anything. But as he looks down at Locke, he sees a giant question mark shaped into in the clearing's undergrowth, with the plane's tail making the period at the base of the question mark.

Eko tastes the soil and finds it was salted in the pattern of a question mark to prevent growth. Eko then picks the ground with his axe and discovers a hatch buried beneath the plane. They open the Hatch and descend. Locke finds a working light switch and they enter a room with several tables (one with cigarette debris on it) with adjustable rectangular magnifying lenses, and a series of television monitors. Locke turns them on and one shows a live surveillance feed from the Swan where Jack is seen walking past the camera. Locke sees another camera above them and also finds a pneumatic tube which proves to be functional when he inserts his map sketch and it sucks it up the tube.

Locke also finds a computer terminal with a command prompt: >: PRINT LOG? Y/N. Locke inputs Y, and a dot-matrix printer is heard in the background as it produces the log printout.

Eko finds another Orientation movie on a U-matic tape. Eko and Locke watch the tape with the orientation again presented by the man in the Swan orientation tape and learn that the hatch they are in is "Station 5 - The Pearl," constructed to observe the other station(s) and to record how the subjects perform actions which they believe to be of great importance. Locke is disillusioned about his habit of entering the Numbers thinking it was just an experiment, whereas Eko's belief in its importance is heightened. He explains that they are being tested and that the reason they push the button is not because they are told to do so but because "we believe we are meant to".

John responds in frustration and anger that he was never "meant" to do anything and that every moment of his "pathetic and useless life" is as useless as that button. Eko explains his responsibility for his brother's death, how Eko's plane crashed on the Island and how on this Island he has found the plane which took off from Nigeria, and here he found his brother and put around his neck the same cross he first wore the day he first took another man's life. So, he asks Locke, how he can say that this is meaningless and that he thinks the task at the Swan is more important than anything and that if Locke won't push the button then he will. Eko takes the log printout with him as they depart.

At the Swan, Hurley tells Michael he was going on a picnic with Libby and adds that he is glad Michael is OK. Hurley says his goodbyes, and tells her how sorry he is for having forgotten the blankets. Libby's last word is a hoarse "Michael...," which Jack misinterprets as a sign of concern for Michael. ♪ When Jack reassures Libby that Michael is fine, she appears frightened. Libby dies. ♪ While Sawyer hugs a tearful Kate, ♪ Locke and Eko make their way back to camp. Michael is sitting in the gun vault, looking solemnly down at the floor, and looks up as the alarm starts beeping.

Retrieved from "https://lostpedia.fandom.com/wiki/%3F?oldid=1116972"
Community content is available under CC BY-NC-ND unless otherwise noted.