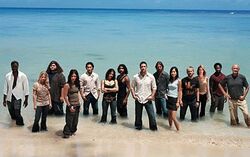 ABC once again invites new and avid "Lost" viewers to take another look at one of the most talked about shows. "Destination Lost" will explore the series in a way that will bring new viewers up to date -- but which current viewers will also find illuminating -- in anticipation of the series' second season premiere. From the back stories of some of the most interesting characters on television to the mysteries of the Island, "Destination Lost" will provide an insightful glimpse into the lives of some of the survivors of the doomed Oceanic Airlines Flight 815.

Narrated in a linear fashion and culminating from the pieces of the back stories told over multiple episodes in the series, "Destination Lost" focuses on the flashbacks of a core of characters -- illustrating who they were and what they were doing before the crash, and how the island has changed their lives, for better or worse. In addition, the island itself will be explored - culled from events that have taken place - which may reveal some of its secrets that might have been missed upon first viewing.