"Jackface" is a fan-created meme based on images of Jack Shephard, as played by Matthew Fox. The purpose of Jackface is to point out the many strange expressions that Jack exhibits through his emotional outbursts, which are often wildly humorous. The urban dictionary definition of Jackface states that it is "a term used to describe the contorted facial expression Matthew Fox's character, "Jack Shephard", makes when he is angry, yelling, or just plain acting crazy on the television show "Lost".[1]

Jackface has been mentioned in popular culture outside of Lost, most notably in the webcomic Cyanide and Happiness. In the particular comic, stick-figure versions of Jack and Kate are having a conversation. An image of Jack from "White Rabbit" suddenly replaces the stick figure of Jack's head, a comedic twist.[2]

As a drinking game

Many fans of Lost take the frequency of Jackfaces to be cause for a drinking game. In the Jackface drinking game, every time a Jackface is noticed, participants take a drink.[3] 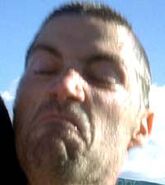 The Jackface of a hero. (saving Boone from drowning) ("White Rabbit") 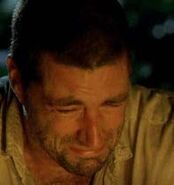 The "wish I'd reconciled with dad but now it's too late and just a baseball metaphor" Jackface. ("White Rabbit") 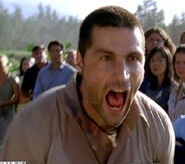 The "ready to attack!" Jackface. ("The Greater Good") Also known as "This is SPARTA" Jackface.

The "OMFG! U IS DESMUND!" Jackface. ("Orientation") 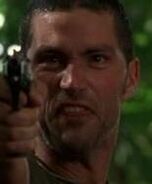 Considered by some the original Jackface. ("Orientation") 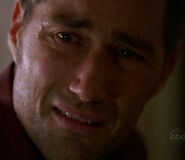 The "my wife just left me and it's all my fault" Jackface. ("The Hunting Party") 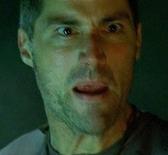 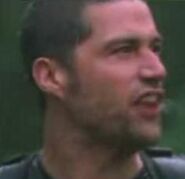 The "Maybe the Others will pay attention to me if I make a stupid face" Jackface. ("S.O.S.")

Jackface can be sad too. ("Live Together, Die Alone, Part 1") 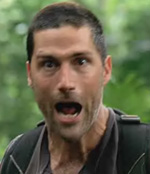 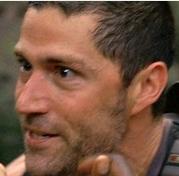 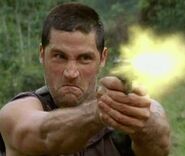 The most famous Jackface of all time... Jack shooting at the Others and hitting nothing. ("Live Together, Die Alone, Part 1")

The "I am about to be bulldozed by a large amount of water" Jackface. ("A Tale of Two Cities")

The "I am about to tackle my father because I have reason to believe that he's sleeping with my wife" Jackface. ("A Tale of Two Cities")

The "Tell me where my friends are" Jackface. ("A Tale of Two Cities")

The "Tom's threatening to kill me and I think I've soiled myself" Jackface. (Lost Moments)

The "I'm in a cage so I might as well look like a monkey" Jackface. ("Stranger in a Strange Land")

The "you did NOT just blow up my sub!" Jackface. ("The Man from Tallahassee")

The "I'm gonna kick your ass and make it look like a mistake!" Jackface. ("Through the Looking Glass, Part 1")

The "Nyah nyah, I think we're getting off the island" Jackface. ("Through the Looking Glass, Part 2")

New Season: New Jackface. ("The Beginning of the End")

The "I still don't believe you" Jackface. ("The Life and Death of Jeremy Bentham")

"And we were never important". ("The Life and Death of Jeremy Bentham")

The "I'm manning up" Jackface. ("The Incident, Part 1")
Add a photo to this gallery

Retrieved from "https://lostpedia.fandom.com/wiki/Jackface?oldid=646805"
Community content is available under CC BY-NC-ND unless otherwise noted.